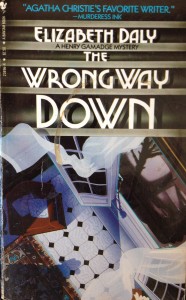 I discovered Elizabeth Daly’s Henry Gamadge series by chance in Hobart’s own Mysteries and More bookstore. I was a bit put-off as the cover described her as Agatha Christie’s favorite writer (I am not a fan) but picked it up anyway. And I am glad I did. The books are intricately plotted (she was a life-long puzzle lover) have great dialogue and interesting characters. Her detective is a bibliophile who occasionally is called in to solve a puzzle by friends or family. Set in New York City and its environs among the “best people” Gamadge, often working with the police, must solve the crime and save the reputations of those concerned. The books are a great foray into a forgotten world, just the thing for a summer afternoon. Pick one up at Mysteries and More! They are also being re-issued by Felony and Mayhem Press.

Elizabeth Daly (1878-1967) won an Edgar in 1960 but is largely forgotten today. She was born in New York City, her father a New York State Supreme Court Justice and her uncle the well-known playwright Augustin Daly. She attended Miss Baldwin’s School, then earned a B.A. at Bryn Mawr College and M.A. at Columbia University. There are sixteen books in the series set between 1939 and into the post World War II era.