Booksellers are frequently asked by their customers, where do you get your books?  In upstate New York these are the books I found on my shop’s doorstep today:  1947 Girl Scout Handbook; 1944 Scottish Rite of Masonry, vol. 1; a  nineteenth century volume of Dante; Habegger’s 2002 biography of Emily Dickinson and Solzhenitsyn’s epic novel August 1914, The Red Wheel Knot 1.  Booksellers, unlike their customers, wonder why these books have been discarded, what links them in the reader’s mind? Although they are no longer wanted at home are they are too valuable to be thrown away, do they have sentimental associations, or ….  Only the Girl Scout Handbook appears to have been read, it is self tabbed directing us to specific sections including Arts and Crafts, Home Nursing, Home Making,  First Aid, Nature and Badges.  Perhaps superceded by a newer edition, or donated after the death of its owner, it was bundled in with the others and left for a new reader to find. 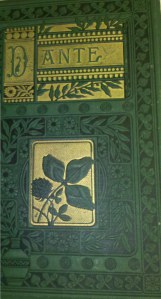 The decorated, gilt-edged Dante is a reprint of the 1814 translation by the Reverend H. F. Cary by Chicago publishers Belford, Clarke and Co.  Alexander Belford and James Clarke started their business in Toronto, moving to Chicago in 1876.  By 1883 they had five branch stores, including one on East 18th Street in NYC.  Their speciality — pirate publishing.

Belford’s first book, published in 1867 when he was just 13 was pirated. They are perhaps best known for pirating Mark Twain’s Tom Sawyer.  He sued them unsuccessfully for copyright infringement in the 1880s, commenting “Belford Bros., the miserable thieves couldn’t buy a sentence from me for any money.”  The firm became notorious for pioneering new, aggressive, promotional techniques, including hippodroming (isn’t that the most wonderful word), opening pop up stores in towns too small to support a bookstore and selling off backlogged inventory at low prices.  Considered unethical by many other publishers the firm went from success to success. Their greatest triumph was the firm’s Americanized, inexpensive version of the Encyclopedia Britannica.  The British compilers watched as the Encyclopedia become a fixture in American homes and schools and decided to contract with the company to publish their inexpensive edition in Britain.

A fire in 1886 destroyed their Chicago building and much inventory and the Panic of 1893 added additional financial stress leading to the break up of the firm.  The Dante was published sometime between 1876 and 1889 doing its share to contribute to the profits Belford realized.  Belford’s share of the firm amounted to over 3.5 million dollars at its dissolution.  There was some money to be made in 19th century book publishing!